It has been revealed that a majority of doctors’ visits are done due to stress-related illnesses that patients have. It has become so rampant, that Harvard Health Publishing has revealed that scientists have dubbed it as “inflammaging” or also known as an inflammation within the body that’s caused by stress and can lead to a compromised immune system, depression, and a plethora of other illnesses.

Harvard Study On Relationship Between Yoga and Stress 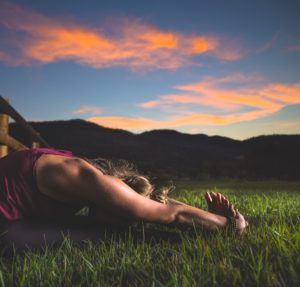 On the contrary, there’s something that you can do if you want to prevent your body from shutting down due to stress. Studies suggest that yoga can help with slowing down the effects of inflammaging and stress on the body.

A study published in the journal, Oxidative Medicine and Cellular Longevity, scientists discovered that doing at least 3 months or so of yoga could significantly slow down the aging of cells in the body.

Of course, one must do at least an hour and half of yoga (which should include correct poses, breathing techniques, and meditation practices) for five days per week in a period of 12 weeks. People who follow that routine are found to have much lower inflammation levels, as well as reduced cortisol in their system. They also have better levels of brain derived neurotrophic factor after sessions, which is a good indicator that yoga may also be helpful in protecting the brain.

Another study from the Frontiers of Human Neuroscience showcased that a 12-week long yoga-related retreat can lower inflammation and stress levels. These kinds of retreats involve regular practices of postures, proper breathing techniques, and lots of meditation. Those who chose to partake can enjoy two hours of meditating, an hour or two of doing postures, and another hour of chants—all done on a daily basis.

After the yoga retreat, participants have better levels of anti-inflammatory markers in their system, and a significant increase in their brain derived neurotrophic factor as well. They also reported that they feel as if their depression and anxiety has lessened.

Both of the studies were successful in showing definitive proof that yoga can shield a person from the terrible effects (in physical and psychological aspects) caused by stress. The studies didn’t just focus on yoga as an exercise, but also as something that can provide relaxation and meditation to help a person focus on their inner well-being.

The body produces cortisol constantly, but a higher level of this in the body indicates that a person’s stress levels are out of rhythm. The more consistently high it is, the more chronic stress is. Additionally, brain derived neurotrophic factor or BDNF is a protein that’s produced by the body to aid the brain in development. People with psychological issues are found to have low levels of BDNF in their systems.

If you’re terrified of fully committing to yoga and don’t want to dedicate three months of your life to a retreat or a full-blown class, there are still pranayama (aka breathing) techniques that you can do in the comforts of your own home or your office without taking up a significant chunk from your schedule. These breathing exercises can help calm you down or energize you, depending on what results you want to achieve. All it’s going to take is a few minutes of your time everyday and the dedication (and patience!) to be consistent in practicing yoga.

On the contrary, if you’re ready to get into yoga with guns blazing thanks to the effects pointed out in this article, then by all means, go ahead. There are so many more benefits of doing yoga and its stress-reducing benefits are just the tip of the iceberg.