While yoga is an ancient practice from the East, always expect Western people to give their own twist to something once it reaches their side of the world. It’s not exactly a “broken” form of working out, so why do people still shake things up? Well, it’s because the more viral or trendy the workout is, the more people will want to try it out no matter how crazy it is.

Let’s all accept the fact that yoga, like with other things in the world, is an ever-evolving craft and people will always find ways of making it more fun than it already is. The following crazy yoga trends aren’t exactly the most conventional way of getting fit and letting go of stress, but hey, if they have awesome benefits, then why not give them a try? 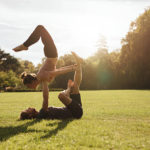 Acrobatic Yoga, or AcroYoga, is one of the most famous variants of yoga, especially amongst couples that want to keep fit and improve their endurance. It’s a healthy method of spending some time with your significant other and is actually one of the least crazy entry on this list.

Aside from helping you become more intimate and strengthen the bond between you and your partner, it’s also an awesome way to relieve some stress. Sure, you’ll be doing insane poses in mid-air, but it’s relatively safe and still has the same benefits as normal yoga.

If you’re constantly on Instagram, you’ve probably stumbled upon people who are posting videos of their ribcages inverted or their abdominal muscles being contorted in freaky ways. Congrats, you’re one step closer to knowing about Alien Yoga. 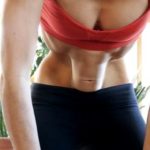 This form of yoga is done by doing a full exhale and then pulling your abs inside your ribcage to improve the strength of your core. It’s like seeing waves on the ocean, but much creepier to look at because someone is doing it with their stomach.

Yogis claim that aside from helping build your abs, it can also aid with relieving problems in digestion and keeping your hormones in check. It’s also actually a part of traditional yoga and is called “nauli,” which was one of the earliest exercises taught, even before any asanas.

If you’re interested in trying it out, it’s apparently quite easy to master even if you’re a newbie in doing yoga. So, go ahead and give it a try to get rid of stomach flab. 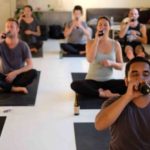 Yoga keeps people fit, while beer can wreck havoc on your weight. Why combine the two? Well, it’s because people can love different things at the same time. And it’s no surprise that fans of the practice are mostly from the United Kingdom and Australia.

Brits and Aussies claim that doing Beer Yoga makes them happy because they can enjoy an ice-cold pint and still meditate. On the other hand, most yogis scoff at the practice since any alcoholic drinks can certainly impair a person’s mind, which can make it difficult to focus on poses and breathing.

There’s always a warning for people who have a tendency to overdrink, as they are not encouraged to continue with Beer Yoga if they can’t hold their own. 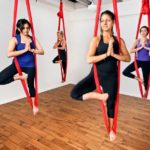 Aerial yoga is a combo of doing aerial stunts and yoga whilst suspended by hammocks that are hanging from the ceiling. It has aspects of Pilates, gymnastics, and dance thrown into the mix to give you the maximum experience.

This reiteration of yoga helps with your body’s posture and the alignment. It can decompress the spine and keep you feet—some practitioners even say that aerial yoga has helped them gain height by an inch and half.

Tantrum yoga, not to be confused with tantric yoga, is a type of yoga that pushes students to scream their lungs out while doing poses. It’s insane to think that people would want something as quiet and peaceful as yoga to suddenly be full of blood-curdling screams. But hey, it apparently relieves stress along with the help of stomping, yelling—basically by throwing an adult tantrum.

The wind down of the workout involves laughing and relaxing right after, which isn’t that bad after all.

As “new” and “innovative” as it sounds, nude yoga has actually been practiced by ancient Indians, and there’s definitive proof in their books about it. It was only a matter of time before westerners found out about it and made sure it became trendy.

Yoga experts say that nude yoga is as effective as other forms of the workout because no clothes = no distractions. Doing yoga in the nude will give you a more effective workout, while at the same time, improving your self-esteem and develop a whole new appreciation for your body.

Now that cannabis is legal in so many places in the United States, smokers are finding new ways of getting high, even using the substance while doing their asanas.

In Los Angeles, a certain yoga class is full of medical marijuana patients. While they’re banned from smoking in the vicinity of the studio, they are asked to come to class while they’re high. Yogis who teach the class believe that combining the drug and the practice is only natural, as they both have calming and uplifting effects on a person.

A quick search online will lead you to results for dog yoga, cat yoga, horse yoga, and even goat yoga. There’s also too many posts of people trying it out that you just have to wonder how the hell they can do yoga while having an animal buddy beside them.

Practitioners say that doing animal yoga has improved their focus, flexibility, and has helped strengthen their muscles. But still, it’s an extra challenging form of yoga, as you’ll be required to balance an animal on your body while doing different yoga poses. Sure, it’s cute, but it seems nerve-wracking! 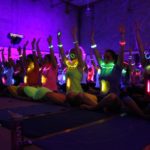 You read that right. Yoga raves are a thing and it seems like it’s actually kind of fun from the name alone. Each session begins with stretching and meditation, and then it eventually turns into a full-scale party on a floor with club music pumping on the background. People who go to yoga raves say that they feel more elated after a session and as if their bodies have better endurance. Also, don’t worry, the food and drinks that are served at yoga raves are non-alcoholic and mostly vegetarian to keep things healthy.

From yoga raves, we’ll go straight to karaoke yoga where practitioners will sing and dance while doing their poses and breathing techniques. It’s not as uptight and strict as full-on yoga classes, but it still incorporates the ancient technique with sing-alongs and dancing. Students claim that sessions help them connect better with their systems, and help improve their balance and focus while at the same time, letting them release some pent-up stress.